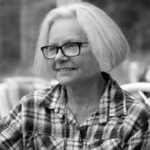 Born in 1943 in Dubuque, Iowa, Sandy Scott now lives in Lander, Wyoming. Surrounded by mountains, lakes, and streams in her Wyoming and Canadian Lake Country studios, she is an avid outdoorswoman, a licensed pilot, and lives the life she depicts. The daughter of an Oklahoma rancher, she trained at the Kansas City Art Institute. Early in life she worked as an animation background artist for the motion picture industry and as a commercial artist. Scott has lived in the West most of her adult life, and when not in the studio, travels the world in search of art and adventure. She can be found afield with her beloved Brittany and best friend, Trish.

A Fellow of the National Sculpture Society and a member of the National Arts Club, her works are in important collections and museums, including the Gilcrease Museum, the National Museum of Wildlife Art, the National Cowboy & Western Heritage Museum, the Leigh Yawkey Woodson Museum, the R. W. Norton Museum, Brookgreen Gardens, and the Briscoe Museum. The Clinton Presidential Library and the U.S. Military Academy at West Point are among her many public and private commissions and installations. Her work resides on many university and college campuses.

In 2019 Scott received the Cyrus Dallin Award for Best Sculpture for Untamed at the Eitlejorg Museum of American Indians & Western Art’s Quest for the West, and in 2014 the Briscoe Museum awarded Scott the Legacy Award for Lifetime Achievement at its Night of the Artists. She has received major awards from the National Sculpture Society, including the Marilyn Newmark Memorial Award for Realistic Sculpture in the Classical Tradition and the Agop Agopoff Memorial Prize for Classical Sculpture, and she is the recipient of the Society of Animal Artists’ Award of Excellence. She was recently honored with a retrospective that was exhibited at several museums.

Montgomery-Lee Fine Art represents Sandy Scott sculptures. Our staff will happily take care of everything — from purchase to delivery. See more of his artwork from her website.