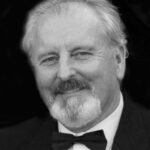 Dr. William Maughan, is the Executive Director of the undergraduate and graduate programs in illustration, and is also Chair of the Academic Steering Committee for the Academy of Art University in San Francisco. Dr. Maughan also directed the Masters Program in both Fine Art and Traditional Illustration at the Academy of Art from 1999 to 2008, and served as Director of Foundations, from 1995 to 1999. After a brief retirement, He was asked to return to the Academy to direct the Masters program in Illustration. In 2012 He was honored with an Honorary Doctorates Degree.

His Fine Art career began in the early 1980s, creating Western and Civil War art and Limited editions prints sold worldwide. After a visit to France in 1987, he began to captivate a wide audience of collectors with his plein air landscapes compositions in both oil and pastel.

Back Side of Timp

Evening on the Grand Canal